A brief history of the Grand Lodge of Ireland 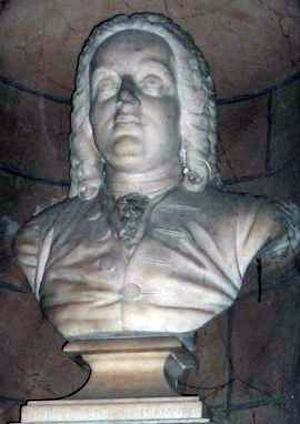 The bust of Richard Parsons, 1st Earl of Rosse and our first G.M., on display in St. Patrick’s Cathedral. 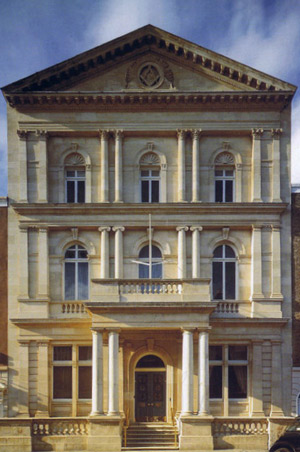 There is considerable evidence that there were Masonic Lodges meeting in Ireland prior to the eighteenth century, for example the manuscript known as “the Trinity Tripos” dating to the 1680s, and the Baal’s Bridge Square (see article elsewhere on this site), discovered in Limerick in the mid nineteenth century, and purportedly dates to 1507. The story of the “Lady Freemason”, Elizabeth St. Leger, also predates the existence of the Grand Lodge.

During the eighteenth century hundreds of Lodges were founded in every part of Ireland, and most of these would have met at inns, taverns and coffee houses. In Dublin, Lodges were known to have met in The Yellow Lion on Werburgh Street, the Centaur Tavern on Fishamble Street, and the Eagle Tavern on Cork Hill, amongst others, and in Belfast meetings were held in The Sailor on Mill Street and the Donegall Anna. The meetings of the Grand Lodge however, generally took place in civic and guild buildings such as Tailors’ Hall in Back Lane, the Cutlers’ Hall in Capel Street, and the Assembly Rooms on South William Street.

Towards the end of the eighteenth century the number of new Lodges being founded increased dramatically at the same time as the popularity of the Volunteer Movement expanded. Several Lodges were associated with Volunteer Regiments, and in Dublin, the First Volunteer Lodge of Ireland No. 620 was founded by the Officers of the Independent Dublin Volunteers in 1783. The Ballymascanlon Rangers were associated with Lodge No. 222, Dundalk, and in Fermanagh there was a regiment known as the Lowtherstown Masonick Volunteers.
The political influence of the Volunteers combined with the success of the American War of Independence and the French Revolution created new ideals of democracy in Ireland. Following the founding of the Society of United Irishmen several Lodges, particularly in the north of Ireland, made public proclamations in the press about the need for reform of the Constitution. Whilst the vast majority of Lodges that did this disavowed violence as the means to an end, some were quite rebellious in their proclamations. Other Lodges, it must be said, publicly dissociated themselves from their more revolutionary Brethren. 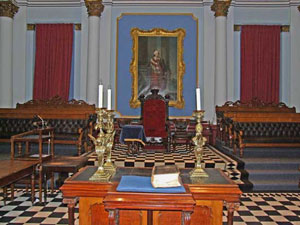 The Grand Lodge Room saw the Installation of the 44th Grand Master, M.W.Bro. Douglas Grey, in 2014. 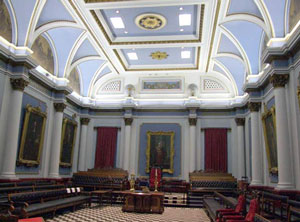 A view of the interior of the impressive Grand Lodge Room.

Government pressure was brought to bear on Grand Lodge and notices were sent out reminding Lodges of the Grand Lodge Law forbidding quarrels of a religious or political nature to be brought within the doors of the Lodge. However, several well-known United Irishmen including Henry Joy McCracken, Henry Monroe, and Archibald Hamilton Rowan were also Freemasons. In 1826, the Papal Bull of Pope Leo XII against secret societies was widely promulgated in Ireland unlike the previous bulls issued against Freemasonry in the eighteenth century. Catholic members of the Order were threatened with excommunication if they failed to resign from their Lodges. One of the most prominent figures in Irish history to have been a Freemason, Daniel O’Connell (see Famous Freemasons elsewhere on this site), resigned after pressure was put on him by Archbishop Troy of Dublin.

The 1800’s saw the expansion of Irish Freemasonry to all four corners of the globe with Lodges established in New Zealand, Australia, the West Indies, India and the Far East. (Ara Lodge No. 348 in Auckland was founded in 1842 and first met on the 9th February 1843. As such, Ara is the oldest Masonic Lodge in New Zealand.) Irish Freemasonry’s most prominent figure during this period was Augustus FitzGerald, 3rd Duke of Leinster (see Famous Freemasons A-L elsewhere on this site), who presided over the Order as Grand Master for an impressive 61 years. The 19th century also saw the expansion of the Masonic Female Orphan School, founded in 1792 to educate the daughters of deceased Freemasons. In 1881 a brand new school building was opened on the Merrion Road in Dublin while, 15 years prior, in 1867, the Masonic Orphan Boys’ School had been founded. 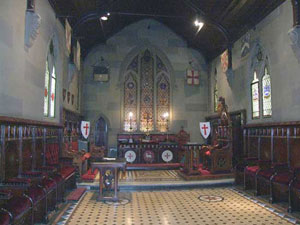 By the 1820’s the Grand Lodge of Ireland had arranged to lease 19 Dawson Street, Dublin, for use as the headquarters of Irish Freemasonry. From there, following a brief sojourn in the Freemasons’ Coffee House in D’Olier Street, the Order moved to other rented premises, the Commercial Buildings on Dame Street, and this became the Masonic Hall until 1869 when the present Freemasons’ Hall opened for meetings. The new building was designed and purpose built as a Masonic Hall and it remains the headquarters of Irish Freemasonry, housing dramatically decorated Lodge rooms, a library, a museum, offices and dining areas. 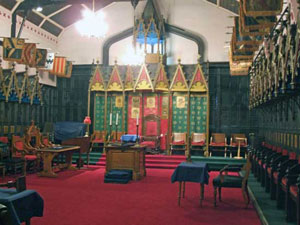 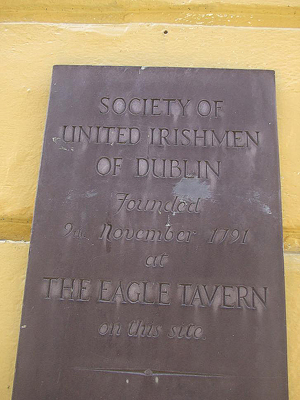 During the 18th century Masonic meetings were held in The Eagle Tavern, Dublin.